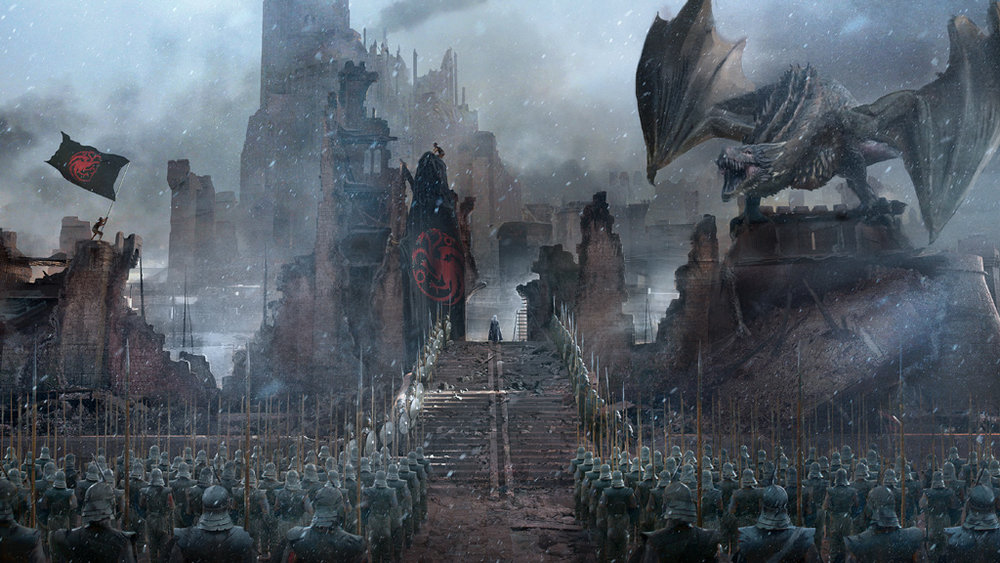 Since Game of Thrones officially ended a year ago I have read or watched countless reviews of the series as a whole, most of which followed a similar trajectory: “It started out great and stayed good for four or five seasons, but then it jumped the shark, and the end was so bad that it ruined the entire show.”

Well, I just finished rewatching all eight seasons of the series for the first time after knowing how it all ends, and I would like to offer a bit of push-back on all the melancholy and lamentation.

Before I jump in let me just get this out of the way: Yes, the last couple seasons were incredibly rushed, and a lot of the plot- and character development suffered for it. The defeat of the Night King and his Army of the Dead was way too sudden, the revelation of Jon Snow’s true identity never got the chance to be as disruptive as it should have been, and so on. I get it. Really.

But the actual story, and especially its ending, is a brilliant piece of political irony.

Much of the criticism of the ending of Game of Thrones stemmed from the actions of Daenerys Targaryen: “Why did the storytellers have us follow the journey of this young would-be queen for eight seasons as she painstakingly pursued her rightful claim to the Iron Throne, only to have her suddenly snap at the end and commit the very act that she and her counselors warned against and repudiated? Why did she mercilessly burn King’s Landing to the ground and incinerate thousands of innocent people in the process? Does she really want to be Queen of the Ashes?”

I admit, I lodged this very objection myself when I first watched the penultimate episode. I had been led to believe that Dany would, as she so often claimed, “break the wheel” and usher in a new era for Westeros, one that was markedly different than what had gone before. By having her do this abrupt about-face, I thought, the producers have wasted our time and played fast and loose with our feelings. The heroine suddenly became the villainess, and we were all collectively sucker-punched.

I was wrong. We all were.

While the show’s creators, David Benioff and D.B. Weiss, made it clear that they wanted to wrap up Game of Thrones in order to move on to other projects (which accounted for the rushed feel of the series’ conclusion as mentioned above), they also expressly insisted that they followed the road map laid out by George R.R. Martin, the author of A Song of Ice and Fire (the books upon which Game of Thrones is based). In other words, Martin told Benioff and Weiss that this was how he was planning to conclude the story (when he eventually finished the final couple volumes).

What are we to make of Daenerys’s actions then?

As I rewatched the series over the past month or so, I concluded that Dany’s decision to burn the capital wasn’t as abrupt or unheralded as it felt at first. Shocking maybe, but not unexpected and not inconsistent with who she is.

Throughout those eight seasons there were numerous hints that her lust for power was stronger than her sense of mercy. As I watched her burn the khals at Vaes Dothrak, and acquiesce to her own brother’s gruesome murder, and feed her enemies to her dragons, and sentence Randyll and Dickon Tarly and Varys the Spider to death — all while knowing that she would soon reduce King’s Landing to rubble and ash — something became increasingly clear to me.

Dany is the wheel.

“The wheel,” of course, refers to the corrupt system of power that is the warp and woof of Westerosi life. The icon of that power structure is the Iron Throne itself, that massive seat built by Aegon Targaryen out of the thousands of swords taken from his slain enemies. Utopian and iconoclastic goals notwithstanding, the moment Daenerys Targaryen sat upon the Iron Throne would have been the moment when “the wheel” was strengthened, not broken.

In a word, if we had been paying attention we would have known that the daughter of the Mad King would never ascend the Iron Throne and thereby stop the cycle of petty and retributive violence. Especially not with three full-grown weapons of mass destruction accompanying her.

As students of empire understand, the abject violence employed by imperial forces against their enemies abroad eventually and inevitably are unleashed upon their subjects back home. This was true in ancient empires like the Athenian and Roman, and as we observe our own increasingly militarized police in the United States (coupled with the fact that we make up only 4 percent of the world’s population but boast 25 percent of its prisoners), it is still true in the American Empire today.

And it became true in Westeros, even though we didn’t want it to. This is why Game of Thrones is ultimately a scathing critique of empire, as well as an ironic indictment of misplaced patriotism. There is a sense in which, yes, we were “tricked” into rooting for Dany. We rejoiced when her brother Viserys was killed, paving the way for Daenerys to become the realm’s true ruler. Our jaws hit the floor when her dragons hatched and began to grow. And who among us didn’t give a fist-pump when she finally acquired her fleet and led the Unsullied and Dothraki army across the Narrow Sea?

Again, we were wrong.

Dany’s imperial designs truly started to unravel when it was revealed that Jon Snow, her lover and trusted comrade-in-arms, was not the bastard son of Eddard Stark as we all thought (including Jon himself), but was in fact the son of Dany’s brother Rhaegar Targaryen and his wife Lyanna Stark, making Jon not only Dany’s nephew, but also the true heir to the Iron Throne and Lord of the Seven Kingdoms.

And it was Jon who broke the wheel.

But he did it not by capitulating to the structures of power, asserting his kingly claim, and ascending the Iron Throne and attempting to be a better, more merciful king than all who preceded him. Jon had no interest in wielding the sword, not over the North and certainly not over the Seven Kingdoms. Ultimately it was the Queen’s Hand, Tyrion Lannister, who convinced Jon that Dany must never rule:

“When Danaerys murdered the slavers of Astapor, sure, no one but the slavers complained. After all, they were evil men. When she crucified hundreds of Mereenese nobles, who could argue? They were evil men. The Dothraki khals she burned alive would have done worse to her. Everywhere she goes, evil men die and we cheer her for it. And she grows more powerful and more sure that she is good, and right. And she believes her destiny is to build a better world for everyone. If you believed that… if you truly believed that — wouldn’t you kill whoever stood between you, and paradise?”

When Jon looked Daenerys in the eyes and saw her madness for himself, he knew he had no choice but to slay her and face the consequences, especially the wrath of Drogon, her last remaining dragon. Drogon — a beast that in Game of Thrones lore is more intelligent than a human — responded by doing what no man or woman had had the sense to do: He focused his grief and rage upon its true source, breathing fire on the Iron Throne itself and melting it down to nothing.

This was no tragedy for Jon, despite his being Westeros’s true and rightful king. For eight seasons we had watched countless claimants to the Iron Throne kill each other in pursuit of power. Renly Baratheon wanted it, but Stannis Baratheon’s claim was stronger once his brother Robert was slain. Joffrey reveled in his authority, short-lived as it was. Tommen ruled for a while, but lacked the ruthlessness needed to keep order (something that his mother Cersei had in spades). Petyr Baelish secretly wanted the throne for himself but failed to climb the ladder to get there. Viserys Targaryen would have sacrificed anything in the world to take back Westeros from the Usurper, and so, it turns out, would Dany herself.

But not Jon Snow.

Jon was content to renounce his true name — Aegon Targaryen — and all kingly claims that went with it, and to return to the North, leaving Westeros to be ruled by a cripple with no regal aspirations and who could father no children to carry on his dynastic line. Whose Hand would be a dwarf.

Thus the wheel was finally broken — not tweaked or altered or modified by implementing incremental changes to the existing structures of power over decades and decades, but truly broken. Sometimes Iron Thrones need to melt and empires need to crumble in order for a better way to be born out of the rubble of the old world.

Jon and Dany are opposites, just as Ice and Fire are opposites. And if I have my finger on the pulse of the common people of Westeros, I’d say they’ve had enough of Fire.