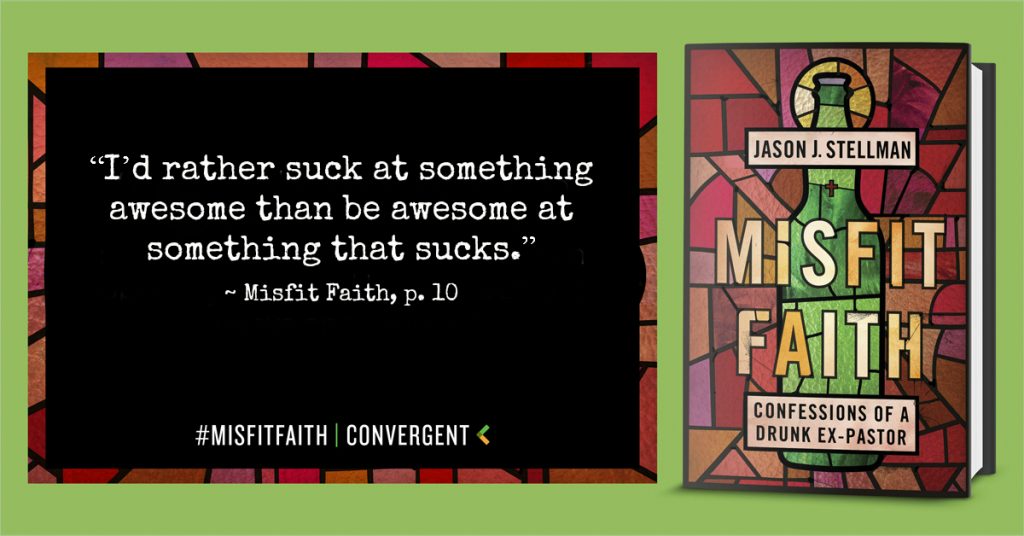 The Misfit Faith Video Course consists of 7 videos, each roughly 45-60 minutes in length, in which I discuss the material from my latest book, chapter by chapter. These presentations are taken from my online community and include comments and questions from members who watched these talks live on Facebook.

At long last, the Misfit Faith audiobook is now available! In this deluxe version, Jason reads the entire book himself (while drinking whiskey no less), and the original audio clips from each and every film and TV show quoted in the print version are included. But be warned, the whiskey leads to a few off-script tangents here and there….

The co-host of the popular podcast, Drunk Ex-Pastors, offers an earnest and irreverent look at what it means to be a Christian in an upside down world.

“Is misfit faith about love or suffering? Feasting or fasting? Divinity or humanity? Heaven or earth? The answer is yes, to all of it. And yeah, I want it all: the now and the later, the spirit and the flesh, the head, the heart, and the stations of the cross.” – Jason Stellman

Jason Stellman has always felt like a misfit. A Protestant pastor with a sharp wit, a restlessly inquisitive mind, and a love of pop culture and rock and roll, he has long sensed that something was missing when it came to his relationship with God. In time, he felt drawn to the Catholic Church, so he stepped down from his ministry and embraced Catholicism, only to still feel misplaced and homeless.

His feelings, thoughts, and troubles echo the disillusionment and confusion of many people who struggle relating to ancient faiths in a postmodern world.

In a book that mixes memoir with theological insights and taut storytelling, Stellman gives an edgy, honest, heart-on-his-sleeve account of what it means to be a mixed-up Christian outsider in the twenty-first century (and why this is a can be good thing). Misfit Faith is an invitation to all the religious vagabonds and exiles with nowhere to really call home, those wanderers who increasingly feel like mere fans of spirituality rather than committed members of the team.

If you’ve ever questioned your faith, felt like a spiritual malcontent, or sought solace for your existential angst at the bottom of a bottle of bourbon, then Stellman just may be the best drinking buddy you’ve never met.

“Jason Stellman’s Misfit Faith is like a Johnny Cash album for the spiritual book world. He snarls, laughs, and cries as he tells us about the strange signposts along his own spiritual journey. Stellman dares you to find your own strange, bizarre, and rebel faith. Count me in as one of the misfits.” —Jonathan Ryan, author, blogger, and co-founder of Sick Pilgrim

“An ex-pastor walks into confession. . . and out comes this drunk miracle of a book. Deeply thoughtful and compulsively readable.” —Peter Kispert, McSweeney’scontributor

“Stellman’s book puts to bed the myth that conversion means an end to questions, doubts, and confusion. His words are a balm to those of us who find our faith journeys resemble the art of MC Escher, with stairways to nowhere and doors that open only onto more doors. But his words are hopeful too. In the Catholic Church he seems to have found a faith wide and deep enough to humble, hold, and challenge him — all while letting him be the misfit that he is.” —Jessica Mesman Griffith, coauthor of Love & Salt: A Spiritual Friendship Shared in Letters

“Misfit Faith is more than just another book about God, man, and the meaning of life. What you are holding in your hands right now is a spyglass masquerading as a book. Four hundred years ago Galileo did something radical with a small handheld nautical tool that brought what had been invisible into view: he pointed it away from the sea, toward the heavens. The result was a revolutionary understanding of the universe and our place in it. Exactly in this way, Stellman uses his 176-page spyglass to achieve a brilliant paradigm shift in our understanding of the ‘Man Up There’ and how we fit into his scheme of things.

“With a unique writing style that is by turns witty and poignant, Stellman wrestles with dichotomous aspects of spirituality—religion vs. secularism, divinity vs. humanity, law vs. love, and others—topping off clarity with a colloquialism that has you nodding in agreement. Alternately tapping into studied wisdom and real-life experience in reconciling these age-old debates, the gift Stellman imparts is harmony.” —Maura Poston Zagrans, author of Camerado, I Give You My Hand and Miracles Every Day

“If mindfully sipped, this book can leave you sitting in the glow of a Love you might not have known before.” —Seth Taylor, author of Feels Like Redemption