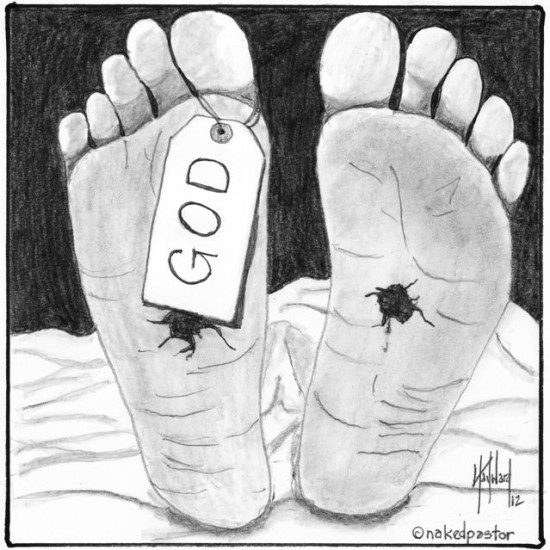 I have been reading a bit of Irish philosopher/theologian Peter Rollins recently, as well as listening to some of his talks on YouTube. His reading of the Christian tradition is quite radical and subversive, and I am not convinced I have really “gotten” him quite yet. In an effort to further that along, then, I wanted to try to articulate his basic position as best I can (because that, for me, is the best barometer for knowing how well I actually understand something).

Mankind is born with a sense of lack (of which a child becomes aware once he develops self-consciousness — it usually manifests itself as a fear of detachment from his mother). This desire for the other Rollins calls idolatry, for it is a desire for that thing out there that will ultimately satisfy us and give our lives meaning. This stems from the doctrine of original sin.

The biggest idol that man can desire is God, for he is presented to us as that which can, unlike all the false promises of the world such as fame, money, or power, really and truly satisfy us. In this schema God is the one who can bestow ultimate meaning, and the cross of Christ is the way to get us there (we’re all quite familiar with this idea, I’m sure).

But according to Rollins, both certainty and satisfaction are illusions, idols that we can never possess. The central point of the cross, rather, is Jesus’ cry of dereliction: “My God, my God, why have You forsaken me?” In this moment, Christ “became sin” in that he experienced in himself the lack, the loss that I described above. In his crucifixion, then, Christ did not capitulate to the existing system either by making possible a new tribal identity alongside all the other options out there (like Jew, Gentile, male, female, bond, or free), or by making some sort of payment to the Father to cover the debt of our sins. Rather, he utterly obliterated the existing paradigm, smashing it to pieces forever.

As crucifixion gives way to resurrection, Rollins appeals (interestingly) to the old nineteenth-century magicians and compares what they did to the Eucharist (noting that “hocus pocus” originally derived from “hoc est corpus,” the priest’s words meaning “this is my body”). A traditional magic trick, he says, consisted of three parts: the Pledge (“Here is a coin”), the Turn (“I rub the coin into my arm and make it disappear”), and the Prestige (“But look, here it is underneath this glass of water on the table”). But as we all know, what we get back is not the same as what originally disappeared — it’s similar (a coin), but different (it’s not the same coin, but was placed under the glass before the trick began). We experience the resurrection, therefore, in that we eat the Eucharist (the Turn) and live out the Prestige as we embody God to the world in our love for our neighbor, the stranger, and the other.

Thus God, according to Rollins, does not “exist,” properly speaking. He doesn’t “stand out” (which is what existence means). He is not meaningful or there to be experienced. He illustrates this by appealing to light: light is not seen or experienced, but it provides the context in which everything else is seen and experienced. God is love, and “love vaunteth not itself,” does not draw attention to itself, but rather focuses on the other. Here is a summary of Rollins’ thoughts on this, transcribed from the video below:

In the resurrection we experience the death of God as idol, as product, as that thing that will satisfy us, and we find a different notion of God, where God is love. Love does not “exist,” it calls everything into existence. Love is not sublime, love is not beautiful, love is not wonderful. Love says, “Look at that person. They are sublime, they are beautiful, they are wonderful.” Love is not meaningful. Love is what renders the world meaningful. When we say that God is love, we mean that the only way to experience God is by sensitizing ourselves to one another, by getting our hands dirty, and by embracing the world.

In the act of laying down our lives we find them. In laying down the idea that we can be happy and just trying to live as humans, we find a form of happiness. It may not be the ecstatic happiness promised by the idol, but it’s one that is intensely beautiful and intensely deep. It’s the place you go for the freedom from the pursuit of happiness.

We need a form of Christianity that reflects and opens us up to our brokenness, that helps sensitize us to the people to our right and to our left, that helps open us up to our darkness and our suffering, not so that we dwell within it, but so that in the midst of it we find healing.

Rather than a belief system, Christianity for Rollins is a new way of living in the world, one which pays little attention to itself but rather is reflected in the love of neighbor that, according to Jesus, is what fulfills the law and the prophets.

(To get to the relevant section, either scroll ahead to 46:10 or click here.)