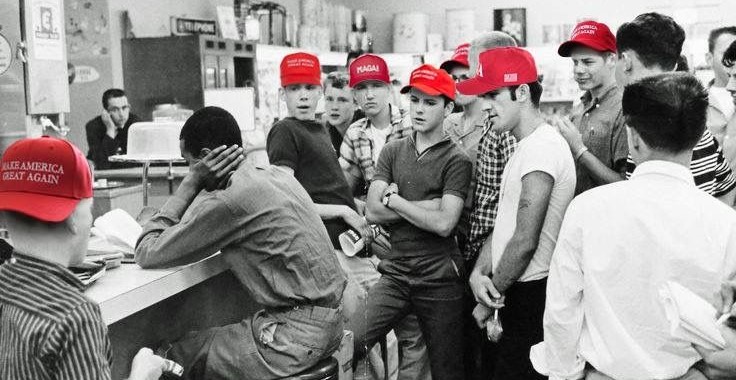 Since receiving a set of Dietrich Bonhoeffer’s works for Christmas I have been doing some thinking.

As you may know, Bonhoeffer was a German theologian executed by the Nazis toward the end of the Second World War, and one of his most important contributions has been his suggestion that what was needed in his own day was what he called a “religionless Christianity.” His reasoning was due to the fact that virtually the entire German church had bought in to Hitler’s xenophobic and genocidal ideology, and thereby in Bonhoeffer’s estimation had forfeited any credibility or claims to moral decency.

Have we reached a similar moment in our own day?

Having garnered something like 80% of the evangelical vote, Donald Trump is without a doubt American Christianity’s pick when it comes to the “Who represents us” question. And in many ways he is indeed the quintessential American: He is loud, brash, and assertive. He is unhealthy and fat. He takes what he wants, whether willingly or by force. He is incredibly selfish and egotistical, as well as utterly tone-deaf and unreflective with regard to how he comes across to others. And oh yeah, he’s a racist and sexual-harasser of women.

American, sure. But Christian? Not so much.

And yet here we are. We have a leader who spends his every waking moment being as unlike Jesus as humanly possible while basking in the support of those who claim to love Jesus and desire to emulate him. Weird, right? Kind of like if the head of Greenpeace hated whales or if NASCAR chose a commissioner with a full set of teeth.

As in Old Testament times when the capture of the Ark of the Covenant by Israel’s enemies signaled the departure of the glory of the Lord from their midst, so today the election of this man from among so many other “pro-life” options signals the death of evangelicalism as a movement with any spiritual credibility or moral authority whatsoever.

(And it’s not just evangelicals — almost 40% of voting Catholics cast their ballots for Trump as well.)

If a tree is known by its fruit, as the Good Book tells us, then perhaps it is time to recognize that American Christianity (much like America itself) is largely rotten and in need of some serious root-work and reform.

To those who seek to remain within the ranks and attempt this reform from within, I applaud your gag-reflex and patience. But for many others of us, the complicity and guilt-by-association are just too much, bringing passages in Scripture like this one to mind:

“Come out from among them
And be separate,” says the Lord.
“Do not touch what is unclean,
And I will receive you.”

As Luther did a half-millennium ago, maybe it’s time to nail another letter to the Church’s door in protest. Only this time it should simply read, “Ichabod.”